Ethiopia’s famous historic circuit in a clockwise direction from Addis Ababa the trip features the geographical features of Blue Nile George, Lake Tana, Limalimo Mountain Chain and the Simien Mountains, Tekeze Valley, as well as the historical sites that are dating back to the ancient Mediterranean civilizations, active religious centers of Ethiopians and also prolific fauna and endemic wildlife that the country hosts. 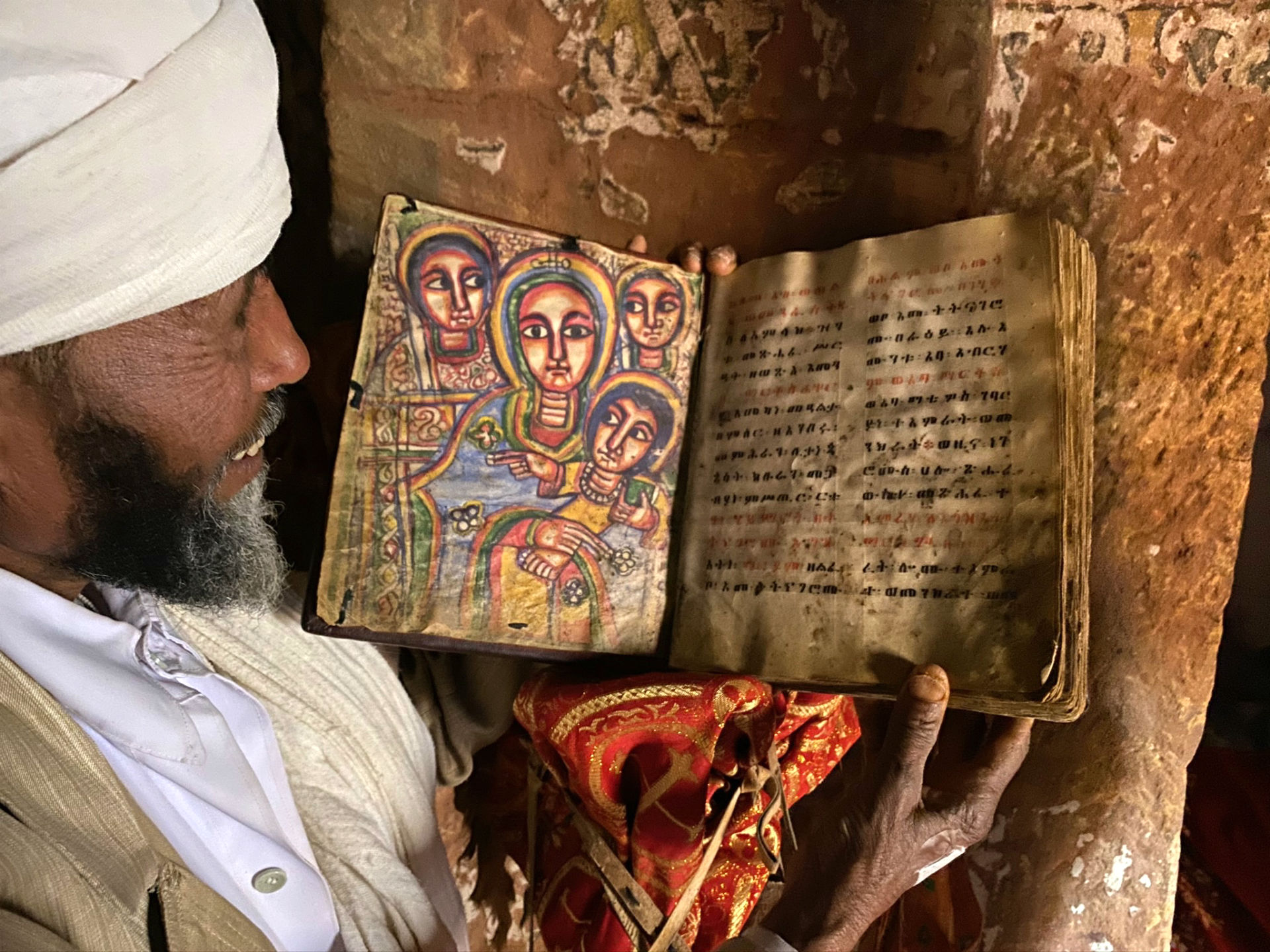 From
$3095
Price is per person and is based on minimum two persons sharing. Trip can be customized.
Contact us for more info
Discover the beautiful sites, endemic wildlife, culture and history of Ethiopia
Your itinerary - Duration: 15 days

The National Museum, one of the best museums in Africa containing Lucy, the hominid woman of the species Australopithecus afarensis who had lived in Hadar in eastern Ethiopia about 3.2 million years ago. The museum also contains some wonderful artifacts dating to ancient Mediterranean civilizations.

Mercato, the real commercial hub of Addis where you can buy just about anything you might want. The St. Gorge and Trinity Cathedrals, the ethnography museum, excursion to Entoto hills, coffee at Tomoca (one of the oldest coffee shops and best of its kind), the fruit juices around Arat kilo, the cultural restaurants that serve Ethiopian cuisine, all of these will make your Addis stay really unforgettable.‍

Debre Libanos monastery is one of the most prestigious in Ethiopia and is an important place of pilgrimage. The surrounding vegetation is lush and in a nearby site you will see one of the oldest bridges in Ethiopia which is also called Portuguese Bridge where the surrounding is inhabited by the endemic Gelada baboons. As you continue to Bahirdar, you will be crossing one of Ethiopia’s largest gorges which drops down around 1000 meters. ‍

Dotted with islands and frequented by flocks of birds, it is surrounded by verdant vegetation housing small, peaceful  villages. Wily cormorants follow the canoes, competing with the expert fishermen in search of tilapia, or the great Nile perch. The lake is dotted with islands, providing over twenty safe havens for the Ethiopian orthodox faith over the years.

On the Zege peninsula northwest of Bahirdar stands one of the most visited churches, Ura Kidane Mehret which originates to the 15th century, richly decorated with paintings from the 18th and 19th centuries in such a way that walls, ceilings, and doors depict an unsettlingly continuous series of biblical scenes, saints, angels rulers and so forth. ‍

Visit Gonder’s elegant 17century elegant castles made of stones and lime mortar. The peculiar architecture of Gonder began with the castle-palace of Fasiladas, which was built on a large area surrounded by twelve gates that formed the imperial city enclave within Gonder itself. This structure inspired successive rulers to build palaces, churches, libraries and so on.

Founded in 1694, Debrebirhan Silassie, is among the several beautiful and famous sites to be visited in the outskirts of Gonder. one can admire the painted walls and also stand under the eyes of the cherubs staring from the famous ceiling, a particularly affecting experience.

Situated between 4430 and 1900 meters, the Simien Mountain national park is interesting for the uniqueness of its endemic animals, the beauty of its flora and the majestic landscape.  In the park you will find three of the most endemic mammals in Ethiopia. The Walia ibex, the Gelada baboon, and the Simien wolf. Approximately 50 different bird species have been identified, among them a great many scavengers and birds of prey. ‍

Drive through Africa’s largest mountain ranges many of its peaks rise above 4000 mt. An impressive scenery consisting of ranges of high summits, valleys, dramatic cliffs and escarpments. It consists of several major plateaus, divided by large river valleys which the western plateau is bonded on the north and east by a massive escarpment, many kilometers long and over 1000m high in places, and cut along its length by steep gorges. ‍

Axum was ones to be one of the big 4 powers of the world, which manifested in the history of the well-known Queen of Sheba, Menelik I, Ark of the Covenant and Saint Mary Zion, Saint Yared and the great kingdom of the Aksum itself. This journey will take you to the old city of Axum, Adwa, the battle field of the late 19th century and Yeha, the oldest historic monument in the sub Saharan countries.‍

Abune Yamata (Guh), about 15 km from Megab. Considered one of the best and finest churches in Gheralta, this church’s cruciform plan is hewn beautifully into a dome like rock. Its features good frescoes and carefully carved columns, pillars, cupolas and arches. The interior part of the church is abundantly decorated with marvelous paintings and murals that are worth visiting. In the afternoon after lunch, climb the rock hewn church of Abune Yemata (Guh) which requires physical fitness.

Abune Yemata, one of the best known of the “Rock Churches“ in the Gheralta Range with colorful paintings of the new and old testament. Climbing up to the church takes 40 minutes and the view is breathtaking. The church is dated to the late Axumite period around 7th - 8th century AD and the ceiling is decorated with painted domes of saints. Ascending and descending is an adventure by itself.

Mariam Korkor which is said to be one of the biggest and most complex rock hewn churches of Tigray situated in the village of Megab which can be reached either via the historic town of Hawzen, about 1.5 hours walk and climb from the village it brings you to the white washed facade of a church facing to the West. ‍

Ethiopia is home to more world heritage sites than any country in Africa. The churches of Lalibela are perhaps the most prominent of all. There are eleven churches in Lalibela, towering edifices seen superhuman in scale, workmanship and concept. Some lie almost completely hidden in deep trenches, while others stand in open quarried caves. A complex and bewildering labyrinth of tunnels and narrow passageways with offset crypts, grottos and galleries connects them all.

Lalibela churches are big, several are in excess of 10 meters high and because they are carved below ground level, they are ringed by trenches and courtyards, the sides of which are cut into with stone graves and hermit cells, and connected to each other by a tangled maze of tunnels and passages.‍

Ringed by hills and fringed by large papyrus beds, Lake Hayk’s deep blue waters are very attractive. The surrounding area is good for birds such as Bee Eaters, Sun Birds and Weavers, including the uncommon Chestnut Weaver. Also of interest in Hayk Estifanos, a small and reportedly very old male-only monastery that lies on a thickly wooded peninsula.‍

Drive back to Addis.

Drive back to Addis crossing scenic roads, various small towns and colorful markets. Between Debre Sina and Debre Birhan, you should look out for Gelada Baboon and Twitchers, meanwhile, can search for Ankober Serin, an endemic seed eater, brown with pale streaks.

From
$3095
price is based on minimum two persons sharing.
trip can be customized.
Click to book now or for more info
Back to trips

We had a wonderful time.

We would like to say how good overall the guides and drivers were. In particular, Mario in Lalibela was very knowledgeable about the churches we saw and gave us good advice about where to eat etc.  He was charming and enthusiastic and brought a pride about his country which was most engaging.

Also Teddy in Axum, did a great job in encouraging us to do a couple of quite challenging hikes to see beautiful churches and to see the early morning procession which was so memorable.  Again, he had lots of local knowledge about restaurants and hotels and was good company.

Charlie in Gonder was very knowledgeable and helpful too and had excellent English, but we were only there for a short time compared to the others.

Among the drivers, Isiah, who was with us in the South was very good.  He was completely reliable, very helpful in doing extra things (like getting our shoes cleaned!) and looked after us very well.

Everyone was good but I hope it is helpful for you to know that these four in particular stood out as especially good.

I hope our feedback was helpful to you - we would recommend that you consider including the option of one or two rest days in longer itineraries like ours for future guests.

We hope to back in Ethiopia one day!