Fall in love with Ethiopia’s rich fauna and unique wildlife

This trip features some of Ethiopia’s best spots if you are a keen bird watcher and wildlife admirer. Begin your trip from Awash National Park part of the Upper Great Rift Valley which hosts magnificent landscapes and supports immense life forms including indigenous and migrant birds, mammals and other wildlife of varying species.

If you are wondering where to visit in Ethiopia and are keen on trekking or are a nature lover, the Bale Mountains will be a place to mull over. Ethiopia's Bale Mountains are a great trekking site and the largest area of Afro Alpine habitat in the whole of the African continent. They rise from the extensive surrounding farmlands at 2500m above sea level to the west, north and east.

The Bale Mountains possess many habitats that are rich in birds particularly the Harenna forest which has been little studied and visited. Harenna forest is apparently a unique afro alpine habitat, the road is lined with orange-blossomed Leonotis, and in the wet season the "Red Hot Poker" is blooming beneath the trees and attracting the brilliant iridescent Tacazze and Malachite Sunbirds. 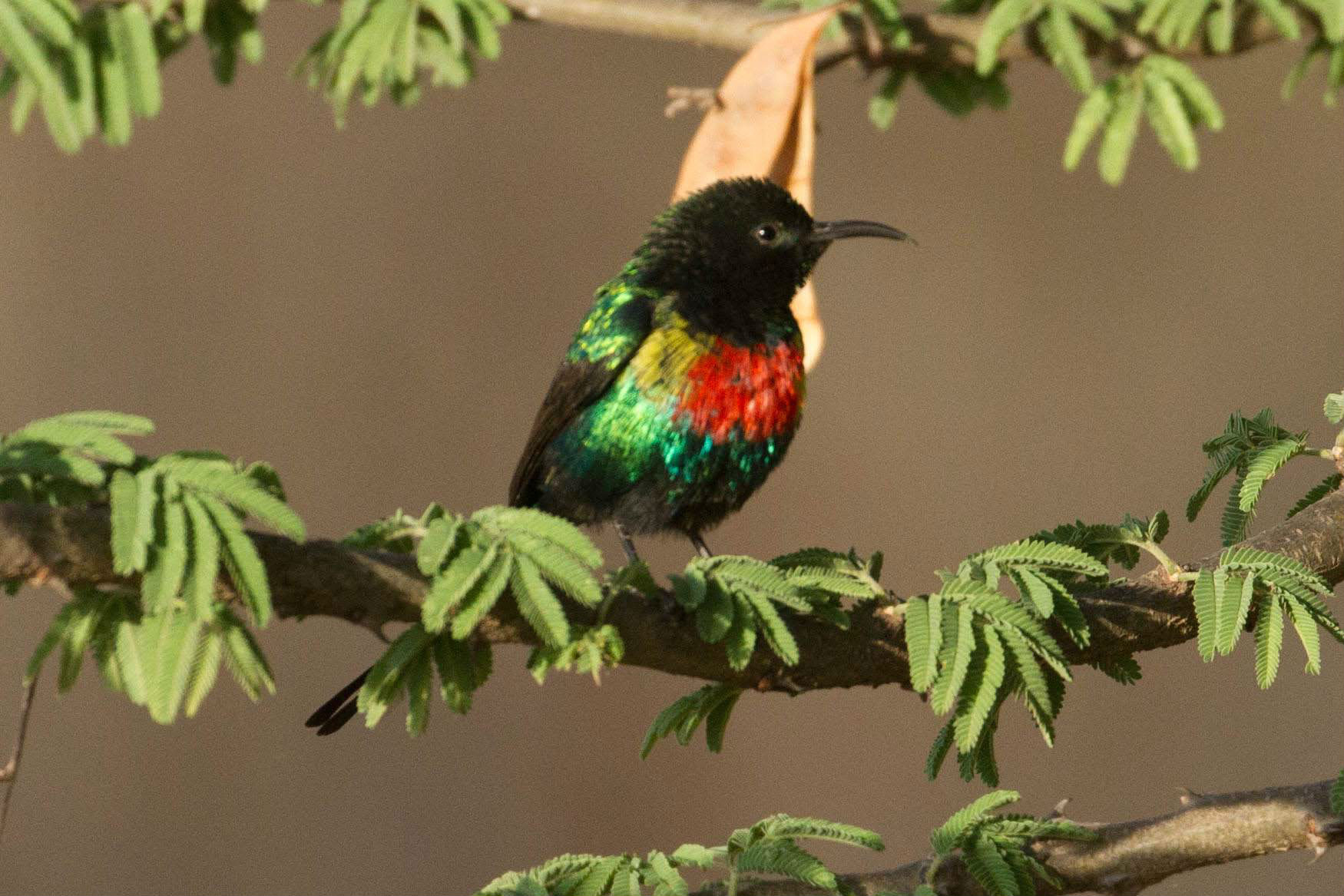 From
$2385
Price is per person and is based on minimum two persons sharing. Trip can be customized.
Contact us for more info
Discover the beautiful wildlife of Ethiopia with this once in a lifetime trip
Your itinerary - Duration: 12 days

Arrival in Addis then drive to Awash National Park.

Awash National Park is the oldest wildlife reserve in Ethiopia situated at 210km east of Addis. You will leave Addis at about 9am and take the expressway to Debrezeit Bishoftu, an attractive town just 50km from Addis surrounded by 5 crater lakes and beautified by bougainvillea and palm trees. You will visit a couple of the lakes while enjoying the fresh fruit juices of papaya, orange, strawberry etc and watching various species of birds like Cormorants, Grebes and Shoveler at the lakes.

You will watch the wildlife and birds and along the river reptiles such as Crocodiles, Monitor Lizards, Turtles and Snakes can be seen. As you are trekking you will admire the beautiful scenery too.

A morning drive through shrub zones and the river banks to see the greater Kudus, Dikdiks, Warthogs, Anubis, Hamadryads Baboons and various birds such as the Golden-backed Woodpecker, the Thick-billed Raven and the Wattled Ibis. The park boasts some 300 species of birds, a list of which is available in the park museum. The Abyssinian Hornbill, Secretary bird, Carmine Bee Eater, Ostrich and some of the birds which are endemic to Ethiopia can be spotted.

The road to the south from Mojo turns to the west leading to the southern rift valley lakes. The first major feature on the road is the bridge over the Awash River. Beside the Koka Dam birds wade in the shallows of the lake and the sparse acacia trees add to the enchanting views. Some 160km from the capital is the lake shore town of Zeway, the largest of the four northern rift valley lakes.

It is oval in shape covering 447sq km and is up to 15m deep. Sheep, cattle, and goats graze under the shade of the sycamore trees which surround the lake. Birds such as Storks, Pelicans, Geese and the African Fishing Eagle frequent the lake shore. Continue to Langano where the chained mountains of Arsi give a beautiful background to the irregular basin of Lake Langano.

The lake has a perimeter of 82km and a depth of up to 30m and the water is light brown because of its mineral content. The multi coloured sands make the sloping beach a perfect spot on which to bask in the blazing sun. It is also an ideal place for water sports.

At Dinsho headquarters you will have a couple of kilometres nature trail that gives you a brief introduction to the plants and animals of the area. There is a good opportunity of seeing Mountain Nyala which are a large antelope in the spiral horned antelope family. Males are a dark brown color with a pair of gently spiraled horns with white tips. They have handsome white markings on their face, neck and legs, together with at least one stripe and some white spots on each side.

The park gives the visitor opportunities for unsurpassed mountain walking, horse trekking and scenic driving. It also gives the chance to view many of Ethiopia’s endemic mammals in particular the Mountain Nyala and Simien Fox and birds such as Abyssinian Wood Pecker, Thickbilled Raven, Wattled Ibis and Blue Winged Goose, etc

The mountains are most famous as the home and refuge of the endemic Mountain Nyala and Simien Fox. Continuing up to the Web valley and then to the Wolla valley from Dinsho you reach the lovely waterfall of Finch'Abera, scenic and rich in wildlife and endemic birds.

Admire the park’s beauty on the road from Goba to the eastern edget. There you will find the Sannete Plateau at an altitude of 4000metres and some of the loveliest mountain scenery in Africa. Here it will be relatively easy to spot several of the endangered Ethiopian Wolves with their red coats resplendent in the sunlight.

The Ethiopian Wolf or sometimes called Red Fox is the rarest member of the canine family in the world. The animal is the size and color of a European red fox, but with longer legs, longer muzzle and a striking black and white tail. The male and female are similar in appearance. The fox feeds on rodents and as a result are mainly found at the higher altitudes where rodents abound.

The Sannete Plateau is an especially good area to see them but they do occur in higher parts of the mountains as well, and down at Gaysay on rare occasions. One of the Bale Mountains spectacular spots is Tulu Deemtu, the second highest mountain in Ethiopia at 4,377metres and the highest in the Bale Mountains. Starting from the main road at its base it takes one and a half to two hours to climb the slopes and reach the summit.

The forest gives way to giant St John's Wort woods at 3300metres. This narrow zone is succeeded by Erica moorlands at 3400metres. You have a a great chance to see endemic avian species such as the Spot Breasted Plover, Abyssinian Catbird and Abyssinian Long Claw.

Drive to Wondogenet then to Awasa.

Drive to Yirgalem, on your way visiting some of the Great Rift valley lakes such as Lake Shala, Abyata and Wondo Genet where you can enjoy the hot springs and swimming pool. Lake Shala, a mysterious place full of dramatic beauty, lies in a deep 118 sq km basin and serves as a mating ground, while Abyata is favored as a feeding sanctuary. It is the deepest of all the rift valley lakes with a maximum depth of 266metres. There are two islands of lumina in the north west corner of the lake. These are inaccessible and so create favourable conditions for Pelicans to breed.

Continue to Awassa, one of Ethiopia’s beautiful and growing cities situated at the side of Lake Awassa. The lake is rich in birdlife with Pygmy Goose, Brown Snake Eagle, Grey Kestrel, Spotted Creeper, African Marabou Storks, and the endemic Yellow-fronted Parrot. Then late in the afternoon you will arrive at Yirgalem where you will enjoy good service at Aregash Lodge.

Drive to Yabelo where there is a wild life sanctuary that supports the country’s largest concentration of Burchell’s Zebra and Grant’s Gazelle. It is also one of the best places to see Oryx, Dikdik, greater and lesser Kudu, Warthog and many small mammals. There are some 280 species of birds recorded in the sanctuary such as the Ethiopian Bush Crow, White Tailed Swallow, and Prince Ruspoli’s Turaco.

Arbaminch town is situated 505km south of Addis. Here you will have a boat trip on Lake Chamo, one of the seven Rift Valley volcanic lakes and home to large pods of Hippos, Crocodiles, Pelicans and Fish Eagles.

Cross landscapes, various towns and small villages to the southern part of Ethiopia. After a lunch break at Sodo, continue to Dorze to see people living in  beehive woven houses which give an interesting insight into their lives and traditions. Their woven houses are built around a central pole, are very high and have a porch and sometimes two flaps for a tiny chink of light which together look like elephants trunks. Over the years these buildings shrink as termites nibble away at the bottom edges. The animals share the hut having an area to the outside edge and help to keep the occupants warm.

Dorze village then back to Addis Ababa.

At Dorze village there is a compound where there may be several huts of varying sizes, one for the parents and small children, another for the first married and one as a cookhouse. Visit particular village huts and a central building for socializing, the idea of an entrepreneurial Dorze Rastafarian. It’s a pleasant environment which feels genuine and might be fun to stay if one was young and into strong drink, quat and native experiences.

Join a young woman as she demonstrates the stripping of the banana leaf to make the ‘bread’. The greenish mush is wrapped in leaves before being buried. Some  had been dug up after it's fermentation period, by now creamy coloured and smelling slightly sour. It was chopped and moulded on a board prior to being cooked on an open fire in a metal skillet.

The fibres left from this process are virtually unbreakable. After about eight minutes of cooking the bread is eaten either with honey or red hot chilli paste. Beer is made from bearded wheat and an 85% liquor from some other plant.

Drive back to Addis enroute visit 13th century stelaes in Tiya which is also a world heritage site.

From
$2385
price is based on minimum two persons sharing.
trip can be customized.
Click to book now or for more info
Back to trips

Roger and I wanted to thank you very much for organising such a wonderful holiday in Ethiopia. We felt so well looked after every single day and your choice of guides and drivers were excellent.

The organisation of our holiday was faultless and we are recommending you to our friends. Our itinerary was packed with fantastic things to do and we felt well looked after at all times. His chosen accommodation was very good.

The places were a good choice in spite of the weather, the drivers were very good and considerate and we will certainly recommend you to anyone looking for a guided tour in the future.

We appreciate being met at each destination with your chosen guide and driver, who always spoke very good English, were very knowledgeable about their area and fun to be with.

Whole trip was extremely efficient and the journey went like clockwork, which is amazing given the local infrastructure.