Immerse yourself in Ethiopia’s rich culture and ancient history

This trip features the massive fracturing of landmasses which happened 14 million years ago in the north of Ethiopia, creating the red sea and resulting in the Great Rift Valley, the largest of its kind on the planet. Astronauts viewing the earth from outer space have said that the great rift valley is the planet's most conspicuous physical detail.

The extremely complex region through which the lower reaches of the Omo river flows, is also another feature of this trip. It consists of different ecological zones, each with their own characteristics, and is inhabited by different people who speak Nilotic, Cushitic, Surmic and Omotic languages. It is home to the Hamer, Banna, Bashada, Kara, Nyangatom, Dassanach, Mursi, Suri and Bodi tribes. 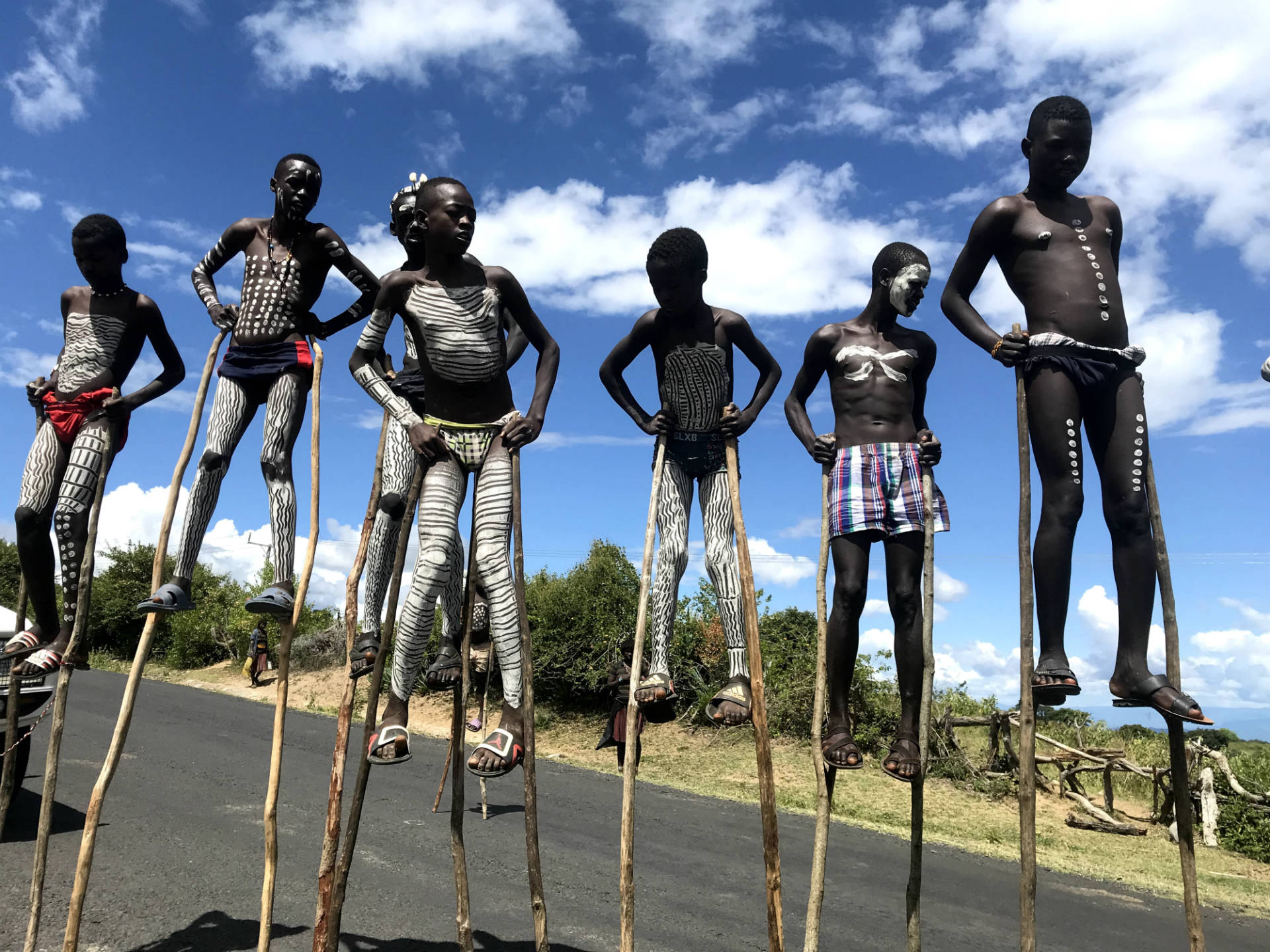 From
$2335
Price is per person and is based on minimum two persons sharing. Trip can be customized.
Contact us for more info
Experience a unique tribal culture in southern Ethiopia lower Omo valley
Your itinerary - Duration: 12 days

Addis Ababa is home to hospitable and smiling people who enjoy the hustle of the crowded streets. Both modern and traditional values and lifstyles are side by side as well as religious diversity and coexistence can be easily witnessed. The city is also home to both the African Union and the United Nations Economic Commission for Africa as well as a number of embassies and continental organizations.

Of all Ethiopian lakes, Zeway offers perhaps the best combination of nature and culture. On the nature side it is an essential stop on the bird watching circuit and is also host to numerous hippos. On the culture side, three of the five volcanic islands and portions of the mainland are home to the linguistically and culturally unique Zay people. They are said to have come here more than a millennium ago, when they shepherded the Ark of the Covenant to safety on Tullu Guddo Island. While the Ark has long since left, ancient manuscripts and other precious relics remain.

Aquatic birds are the main draw at Abijata - Shalla National Park. The most sought after are the Flamingos, with populations that can reach 50,000 during the rainy season. Also in residence are a wide variety of Cranes, Plovers, Gulls and Ducks. Overall there are more than 400 bird species in the park.

In Lake Shalla hot springs, the water’s purported healing properties draw locals who bathe in the small steamy streams that lead from the springs to the lake. Some also cook cobs of corn in the hot water. Lake Shalla, Ethiopia’s deepest lake up to 266 metres has eight volcanic islands, and is a breeding ground for aquatic birds.  Lake Abijata Shalla is highly alkaline and hosts large numbers of lesser and greater Flamingos.

Wondo Genet is a popular recreational spot and birdwatching destination. Hikes through the partially forested hills and the thermal waters are of interest to visitors.

Hawassa is one of the country’s best planned and most attractive cities and is the capital of Sidama regional state. With a population of roughly a quarter of a million, Hawassa is the Rift valley’s largest city. A number of quality hotels, lake side resorts and restaurants make it a pleasant stopover for travellers.

This is a coffee growing area, hallowed for coffee aficionados. Even casual coffee drinkers enjoy sipping the aromatic Yirgachefe coffee, among the most coveted varieties in the world. At Yabello birdwatchers come for easy viewing of two endemics, the Abyssinian Bush Crow and White Tailed Swallow. Spanning some 2500 square kilometres, Yabello is also home to some 2000 Burchell’s Zebra.

Roughly a quarter of a million Konso people are spread across 42 villages, most on hill tops and surrounded by high stone walls which were built centuries ago as a defense against outsiders. Elaborate stone terracing systems help retain moisture and prevent erosion on the steep hillsides. On these terraces the Konso's raise sorgum, millet, corn, peas, and sunflowers. The Konso are also well regarded artisans. Weavers make the traditional skirts and shorts, smiths craft bronze earrings and bracelets and wood carvers create the famous Waka funerary statues. Gesergiyo an area often referred to as “New York” because the many towering sand formations resemble skyscrapers. Local legend attributes them to divine intervention, geologists cite erosion as the creative force behind these unique features.

The Tsemay appearance is among the most colourful of the southern tribes. Thick bands of brightly hued beads are worn around their necks and waists. Men often don short cloth wraps around their waists in bright shades of blue, purple and pink. Hamers, both women and men are striking to behold. Women usually twist their hair into red tresses using mud and butter, often wear leather skirts dotted with cowry shells, bead necklaces, and copper bracelets. The most important event in the life of a Hamer male is the bull jumping ceremony a rite of passage and a precondition of marriage. Turmi village has a colourful Monday market and excursions to the Hamer villages will be of great interest to you.

The Karos are best known for their creative body painting. For dances and festivals, they decorate themselves with paints made from white chalk, black charcoal, yellow stone, red iron ore, and plant oils. Women wear shell necklaces, beaded belts, and brass or copper bracelets. Scarification is common for both sexes and is done for beautification and in the case of men, to signify the killing of enemies and big game. Men and women also have pierced holes in their lower lips into which they insert various adornments. On Tuesdays, there are two markets that should not be missed one at Dimeka and one at Alduba.

A Mursi woman is highly recognizable because of her lip plates, a sign of beauty whose size signifies a dowry amount. The lip plate is a visual expression of what it means to be a woman, someone who can bear or has borne children. Men also have a challenging path to marriage they must emerge victorious from a stick fight called Donga.

On Thursday you will witness one of the most colorful markets in the Omo valley, the Keyafer Market. Here you will see the Ari people, the majority tribe at Keyafer as well as the Hamer and Benna tribes from the nearby areas. With mountains in the background and two Rift Valley Lakes below, the mid size city of Arbaminch, has a striking setting and a prime location next to Netch Sar National Park. Several hotels have staked out privileged positions on the escarpment, offering guests panoramic views of the forest and the “Bridge of God” isthmus that separates the two lakes.

Ethiopia’s most admired weavers, the Dorze, craft colourful gabbis (robes) and netelas (shawls) as well as fine baskets, pottery, and leather work. Enset (false banana), the staple food is found in nearly every compound, along with cabbage, tobacco, and various spices. The compounds are major draws, with unique bee hive shaped huts up to 10 metres in height.  Along the way you will enjoy spectacular views of lake Abaya more than 1700 metres below.

Even novice photographers are sure to get a beautiful shot of Burchell’s Zebra among the white graces that give the park its name. There are some 350 species of birds here including the White Tailed Lark, Abyssinian Hornbill, and White Fronted Black Chat. It has great diversity of habitats, which include the grass plains, dry acacia savannah, evergreen groundwater forest, and the wetland areas of Lake Chamo and Lake Abaya. Arbaminch’s name and its drinking water originate from 40 natural cold springs. At the confluence of Lake Chamo and the Kulfo River, scores of massive Nile crocodiles sun themselves on a long sandy spit.

Fly back to Addis.

From
$2335
price is based on minimum two persons sharing.
trip can be customized.
Click to book now or for more info
Back to trips

Thank you so much for the wonderful holiday you organised for Malcolm and I. You and your team of drivers and guides have been very caring and looked after us very well. We really enjoyed our trip despite the hiccups!

Mulu was excellent as was Lulai, Rafael and Chuchu. Some of the local guides in each place were also excellent, and we realize that those that weren't so good were just bad luck as they were often next in 'rotation'.

The landscape in so many parts of the country is stunning. We so much enjoyed the warmly welcoming and friendly people. When visiting one church (after a two hour walk!) we had to wait for a key to be found to be able to get into the church as the priest was away conducting a funeral service. We found ourselves surrounded by 17 children and played english games with them. Malcolm did his 'I'm a little teapot' impression which I think bemused them and had me in fits of laughter.

I hope the comments help you for the future. We wish you the very best for your company and will look forward to being with you again should we be back in Ethiopia. Please thank all those involved in our care. We very much appreciate all their efforts (and yours) which has given us such a wonderful experience.