This trip features Ethiopia’s best community trekking routes in the historic circuit of Ethiopian northern highlands. It combines churches and archaeological sites, villages, and a beautiful scenery. It is mainly a trekking holiday but involves flying to the main destinations, driving to the sites where you start the trekking and be picked up from the end point. Where necessary and on request we will arrange mules to carry your bags. You will stay in local guest houses and food will be served by the locals. Part of the income from the trip directly goes to support the local communities. Join us in this great adventure! 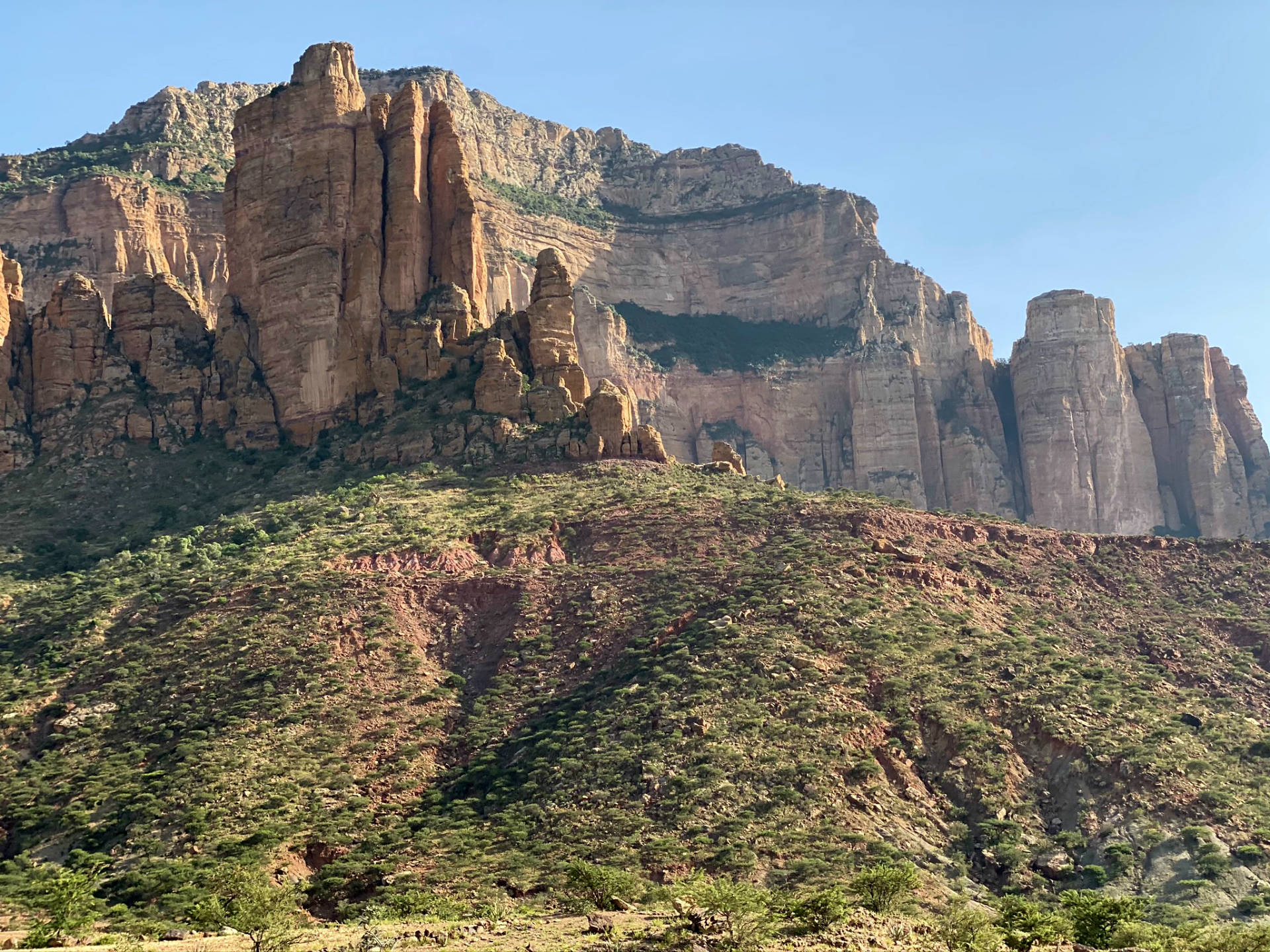 From
$3049
Price is per person and is based on minimum two persons sharing. Trip can be customized.
Contact us for more info
Hike through Ethiopia's rural communities, villages, and great scenery.
Your itinerary - Duration: 12 days

Upon arrival visit Addis Ababa, Ethiopia’s capital and one of the busiest cities in Africa. It is also the third highest capital in the world. Addis Ababa is also the diplomatic capital of Africa which hosts the headquarters of the African Union and more than a hundred embassies. You will visit one of the most important museums of Africa, the National Museum that showcases among other things the 3.2 million year old skeleton of Lucy.

Mekele City then drive to Adigrat.

After a relaxed breakfast, take a city tour of Mekele, founded by Emperor Yohannes IV as his capital, after he relocated his power base to Mekele in 1881. Mekele is also the capital city of the Tigray National Regional State. Later this afternoon we will take a Mekele City Tour. We will view the impressive Dejatch Abraha Castle built in the heart of the city around 1906.

Today the castle is a hotel. We will also stop to visit the Hawelti Monument of the Martyrs, erected in memory of fighters against the military regime (1974-1991). The artistic tower spiraling more than 100 feet above the ground and mounted by a large ball, is visible through much of Mekele. This is the centerpiece of the large war memorial. The memorial is modern and engrossing.

Later after a lunch break, we will visit historical Atse Yohannes IV Palace, which is named after the famous King who ruled Ethiopia from 1872 to 1889. Emperor Yohannes chose Mekele as the seat of his government and built his graceful palace, still intact, in the 1870s.

The palace now serves as a museum and is highlighted by the Emperor’s throne, the royal bed, his ceremonial dress, rifles, and many other valuable historical collections. The fantastic throne of Atse Yohannnes IV was made by the Italian engineer Giacomo Nareri in 1874 and it is the eye catching centerpiece of the museum.

The closest site to Hawzen and the south is Shimbrety. It is built on a sandstone escarpment on the western edge of this area, at about 2,800 metres with great views towards Adwa and the lower land to the west. The peak at the end of the ridge - Dega Amba - dominates the view to the south with the cliff faces around it. There are also views back to the south east and along the ridge heading northwards.

There is also a good chance to see Gelada baboons on the cliffs around Shimbrety. Down below if taking the direct route, you pass a village and the pretty valley around Shimbrety. It is an easy walk to Gohgot, and not much further to Erar, although this has some hilly sections.

Shimbrety is the closest place to Gheralta Lodge, although as it is some 20 km away it may be good to get a transfer to either the trail head at Muzety or to the village at Dega Amba below Shimbrety itself. Muzety to Dega Amba is about a 90 minute walk, and the walk up to Shimbrety from there takes about another hour.‍

Guhgot Hidimo (community guest house). The most southerly site to the east is Guhgot. Guhgot is set at the foot of a cliff at around 2,600 metres but still on higher ground with views into the valleys. It is close to a number of rock hewn churches including Gohgot Eyesus and Mariam Bahara, and not too far from a very old  wooden church two thirds of the way up a cliff called Debri Giyorgis. Debri Giyorgis can be visited on the way to Enaf, a walk with one steep uphill section and other uphill stretches. The lovely church of Mariam Bahara is the way to Erar or Shimbrety.

Enaf, the most north easterly of the four sites, is also the highest at almost 3,000 metres. It has wonderful views over the whole range of sandstone ridges and valleys that stick out like fingers from the peak (3,330metres) just west of Adigrat. From Enaf it is possible to climb the peak and reach Erar in one day, but this is a tough walk.

It is a great walk to Enaf from Gohgot, with some climbing and spectacular paths. There are also facinating churches on the way. It is also possible to walk down to the outskirts of Adigrat from Enaf. It is about 15 km, quite a hard walk up but not too bad if going down (depending on your knees). It takes about 4 hours to the main road. There is a new lodge here, Agoro Lodge is situated on the dirt road that comes down from Enaf and is on the edge of the mountain a few kilometers from Adigrat town.

After breakfast trek to Erar. Like Shimbrety it is on the sandstone escarpment on the western edge of the area, also at 2,800 metres. It is a bit closer to the mountains on the Adwa side with some interesting pinnacles of rock in view to the northwest. About a 90 minute walk from Erar is the village of Kiat underneath the cliff face, with its lovely rock church Kiat Mariam. The walk down may take about 30 minutes, but going back could take up to 1 hour. Near the top of the path is the trail head where vehicles can pick you up to take you on to Axum.

Fly to Lalibela, visit the rock hewn churches of Lalibela.

Trek through southern Lalibela, churches and villages. Marvel at the amazing Werkaye Mariam, Mequat Mariam, Atrow, or to Abuna Yoseph and Hudad among others. The trekking project also benefits the local communities with the trekking and accommodation facilities. Visitors typically do three to five days trekking, staying three or four nights in the community run accommodations having tasty meals cooked by the local villagers and watching the sunset over the mountains. This will be the highlight of your trip.

Enjoy the coffee ceremony chatting with the local people, a drink at sunset watching the world from a cliff. Simple but tasty food is served for breakfast and dinner in a cosy restaurant tukul, a picnic lunch is also provided for the trail. You will walk 5-6 hours each day and stay in huts built and maintained by local villagers who also prepare your meals. Injera with (stew), lentils or chick peas.

The terrain is largely level and follows the escarpment. At first the altitude might slow you but after a while you will become acclimatized. Good walking shoes or boots are safer and more comfortable for the uneven rocky ground, particularly the descent to Yadukulay Tukul camp.‍

After breakast you will meet your reputable trekking guides who are well experienced around the mountains and know about cultural tours. They have much knowledge of plantation and birds and will meet you at the lodge with donkeys, porters and a cook. The trek is to one of the highest mountains called Hudad, and the area around Lalibela. You will see unique flora and fauna and there is an interesting village to experience community life, with a lesson of making injera, cooking and other activities.

The first day will be 6 hours of trekking if starting from the Laliblela Lodge. It is possible to drive some of the way and then start 4 to 5 hours of trekking. Along the way you can stop at different locations for taking pictures and a takeaway lunch will be served at a convenient village.

Wake up early to watch the sunrise and have breakfast. Then proceed trekking for 5 to 6 hours to the third highest mountain of Abune Yosef. After a lunchbreak, visit the monastery of Abune Yosef, the baboons and red fox.

After breakfast trek through endemic flora and fauna such as giant lobilia and a spectacular landscape. This day will be 5 to 6 hours trekking to Yimrehane Kirstos where you will visit the 10th century monastery.

Drive back to Lalibela. Along the way stop at a local village to experience the life of the community and possibly visit one more rock hewn church of Bilbala Cherkos.

Fly back to Addis.

From
$3049
price is based on minimum two persons sharing.
trip can be customized.
Click to book now or for more info
Back to trips

“ Our trip was everything we hoped it would be,

and if we feel we missed anything it was only on the realisation of how much there is to see and how little time we had available.

Our journey home went smoothly and with out problem. Thank you for looking after the last evening in Addis, we enjoyed the music and dinner very much and it was good to meet you properly.

We really enjoyed our trip and feel very privileged to have been able to visit Ethiopia and see some of the fantastic countryside and meet some lovely people.

Thank you for organizing it all for us.

Keep on doing what you are doing! Your Ethiopia is a very special place.